🎉Happy New Year to You!🎉

I want to thank you very much for being there with us this year! This week, I found myself looking back at this nutty year, a historic one, and I wanted to share my musical year in review with you. A little warning, it's long, but hey, it was a longgg year (and lots happened)!

And now, for an interesting read, here are my highlights from the past 12 months... 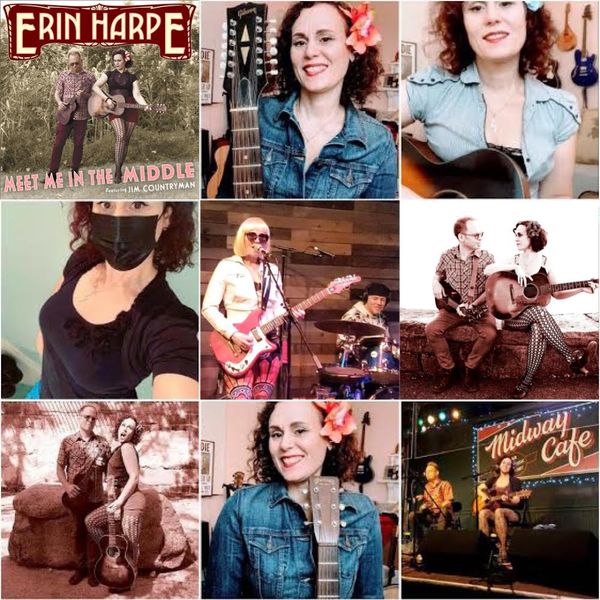 2020, what a crazy year, and I’m sure we can all agree – it’s good to see it end! But it wasn’t all bad... Despite the pandemic, the lock-down, and the many other unpleasantnesses including losing all our gigs, we still found ways to continue to make music and create a sense of connectedness and community. We started live streaming (and did over 60 online shows!), we recorded our first CBD album (quarantined at home) – both of which got us wide attention and support all over the world! We look back at the year that was 2020 with a lot of gratitude, some sadness, and a lot of love. Here’s our 2020 Year in Review!

The year started out pretty normal – besides the benign-seeming Corona beer memes – that all of us ignored! (We didn’t know!) We had quite a few shows with all our groups: Erin Harpe & the Delta Swingers, Lovewhip and our new Country Blues Duo.

Some of our winter gig highlights include Delta Swingers shows at Pitman’s Freight Room in Laconia NH, The Porch in Medford MA, One Longfellow Square in Portland ME, the Next Page in Weymouth MA, and the Red Square in Burlington VT. The CBD played the awesome Stomping Ground in Putnam CT, the new Treehouse Brewing in Charleton MA, Strange Brew in Manchester NH, Mount Snow in Vermont on a snowy night, and a couple of local shows at Atwoods in Cambridge, and the Dark Horse in Somerville MA. And Lovewhip had a fun hometown show at the Milky Way in Jamaica Plain MA, a great dance party at Opus Underground in Salem MA, a wintery beach show the Ocean Mist in RI, and a double header at The Rack at Sugarloaf in Maine (with a Lovewhip dance party on Valentine’s Day, followed by a crazy Delta Swingers dance party the next!). That particular weekend, I remember it being very cold, and thinking “It might have been -20 degrees out, but it was HOT on the dancefloor!” Little did we know how much we could miss such nights!

Our last show, unbeknownst to us, was the Delta Swingers at the historic “Theodore’s Blues, Booze & BBQ” in Springfield, MA on March 7th – a super fun night! We were really looking forward to playing a new (for us) local venue, Beat Brewhall on Friday, March 16th, but it never happened. Over the next days we watched as every gig we were looking forward to got canceled, one after another.

I think at this point everyone was reeling, especially us gig workers. We jumped into action with the first idea we had to stay connected: live-streaming! At first we thought it would be a good idea to go live every day, which we kept up for the first week or so of lockdown. After that, we cut back to every other day, then settled into a twice a week broadcast, which we kept up through September. We named our new show Wi-Five Live (I made a logo and everything!). It was a really great way to connect with everyone, and it gave us something to do besides worrying about the future. We were so thankful for the outpouring of kindness and support we got from our friends, fans and family, sending tips and love. We even got some press, when the Boston Herald highlighted us in an article about the plight of musicians and the new world of livestreaming in the pandemic, with a photo and everything! (Thanks to writer Brett Milano!) We also were fortunate to have the support of Boxford Cable TV, who sponsored us and aired our show live on their station (thanks to our friend Brad Sweet)!

On top of that, I did some teaching. I have had several weekly guitar students on Skype for a while, but on May 16th, I decided to give my first online workshop, “Intro To Country Blues Guitar”, on Zoom! The workshop was quite successful, especially for my first “Zoom”, with 29 students participating from all over (thanks to all who signed up!). I also taught two video courses for Augusta Blues & Swing Week, which was virtual this year like so many other things due to COVID-19. As with live-streaming, there was a learning curve as everything went virtual, but it was a good experience overall, and I’m thankful for all the great feedback I got from my students. The experience got me excited to keep sharing my expertise as a guitarist and second-generation player/torch-carrier of the old-time country blues, and it’s been so fantastic to be able to reach a worldwide audience, virtually through video and workshops, that next year I’ll be launching my online music school, The Erin Harpe Music Academy! Stay tuned for more about that in the coming days!

We had a couple of weird pandemic gigs that, though they didn’t actually get canceled, were turned upside down by the Corona virus. The first was July 10th, a farmers market we’ve played before, but the town of Petersham decided live music (even outdoors), was not safe. Thanks to organizer Roy Nilson, who had a great idea so the performers could “retain the booking”, we recorded audio of our set ahead of time, and showed up with our PA, and DJ’ed our set!

July 21st the Delta Swingers played Henniker Concert Series in NH without a hitch, and we were able to play this outdoor show with the band and with an audience (though pandemic-style)! It was the first time we saw an audience cordoned off in socially distanced squares, painted on the grass 6 feet apart. In another new Covid-era development, our merch table went online-only, and we had to put up signs with a link to buy merch.

July 22nd was to be our long-awaited return to the legendary Caffe Lena in Saratoga Springs, NY. We were actually quite surprised it wasn’t being canceled, but there was to be a small, socially distanced audience. This was our first time leaving the house overnight since the start of the pandemic! During our trip out, the local rules somehow got changed, and no audience was allowed, so we ended up doing a remote live-stream with just us, and two or three staff in the room.

Also in July, we recorded our new album, Meet Me In The Middle (which coincidentally, I already planned as a duo album long before the pandemic, but hadn’t had a chance to record because of our busy tour schedule). By the summer, we were finally ready to start. It was a strange serendipity, because everyone was stuck at home, “flattening the curve”, and here we were with this big project to work on. The recording came together in a couple of weeks, with me at the controls, arranging/editing/producing/playing/singing, and Jim as my audio engineer/bass player/backup singer. We sent the tracks to our friend Pete Weiss to mix, and then it was mastered by Peter Linanne.

Next up was the cover art, and I was determined not to use a selfie, so we ended up doing two pandemic-friendly outdoor photo shoots locally with photographer friends who were willing. The first was with Joe Harrington at a park in Everett MA, which, though quick, yielded the cover shot(!) and a few other nice shots. The second shoot was up the street from our house in JP in lovely and historic Franklin Park, with our friend photo- and videographer Dave Geissler, who got quite a few nice shots (including the inside cover), as well as all of the video footage for the “All Night Long” music video!

I pretty much rushed right home with all the photos, hoping we had something (we did!), and I laid out the album cover over the next couple days (at this point I had a tight deadline!). Over the next few weeks I designed the rest of the CD packaging and merchandise, and sent them to print. Next was a website and social media redesign, pre-sale, and getting ready for release day (October 30th!).

We continued to do a few shows here and there in August, with several outdoor house concerts, and even a couple of clubs.

August 8th the Country Blues Duo got to play the new outdoor stage at The Porch Southern Fare & Juke Joint, which is our favorite new local Boston-area club for blues. It was a gorgeous evening, and it was wonderful to see so many friends in person (though distanced), dancing and enjoying the show!

August 26th we played a CBD show indoors at the Midway Cafe down the street in Jamaica Plain MA, which was fun. There was a very small live audience, masked, we played from behind a piece of plexiglass, and it was also live-streamed.

August 29th we were special guest performers at Adam Ezra’s Ramble, raising money for homeless veterans, which was also virtual this year. We were looking forward to being there in person, but, maybe next year!

We were surprised to find that the Delta Swingers’ show at Zinger’s in Milford NH on September 11th wasn't canceled! The show goes on, with a limited, socially distanced, masked audience. The show is also live-streamed. We were happy to be able to play with our drummer, Shawn Meehan, again, and to see a few friends!

September 30th we released the single “All Night Long”, along with our new music video for the song, which was debuted by American Blues Scene!

October 30th our new album, “Meet Me In The Middle”, is released, with a live-stream album release party to celebrate! The album is a hit with DJ’s, and it debuts at #13 on the Billboard Blues chart, and makes it to #9 on the Roots Music Report’s Blues Album Chart! Over the next weeks and months, the album continues to get great reviews, probably the most exciting being a 3 out of 4 star review in MOJO magazine (“one of the coolest music mags in the world, like a European Rolling Stone, but better!” says Jim). Also during that time I do quite a few interviews for print and radio, and even TV, including an interview with Frank Matheis for our upcoming review in the January issue of Living Blues Magazine!

With the pandemic still a big worry, we decided not to travel to see family for the holidays this year, which was tough, though we still managed to have some virtual family time. We cheered ourselves up with a series of holiday livestream parties, one before Thanksgiving, and two before Christmas, featuring songs from our album “The Christmas Swing”.

Which brings us to the present, as we get ready for our big end-of-the-year blowout this Thursday, December 31st at 7pm EST, on Facebook Live of course! 2020, we couldn’t be more ready to see you go! But we did manage to have an extraordinary year, even amidst all the chaos. We so are grateful for your support, and the community we’ve created together in this year of social distancing and Zoom get-togethers.

Thanks for coming along for the journey, and here’s to things getting (even) better in the new year! Let's celebrate!!🍾🥂 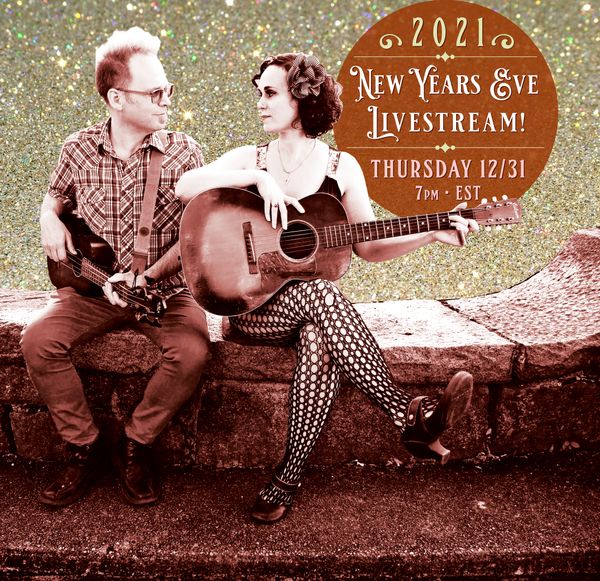